Keep the dark baker's chocolate away from dogs

Chocolate contains theobromine and caffeine which are methylxanthines and dangerous to your pets in large quantities.  Methylxanthines are mild stimulants and act on the central nervous system, smooth muscle and cardiac muscle.  They also act as diuretics which increases the excretion of urine.  A large enough dose can lead to heart failure although death from chocolate poisoning is quite rare.

Theobromine Chocolate comes from the roasted hull of cocoa beans (Theobroma cacao).   Livestock and other animals that are fed cocoa-bean hulls and products derived from them have been known to succumb to chocolate poisoning.  Theobromine is also found in varying quantities in colas and teas.  Theobromine is absorbed through the intestinal tract and can affect the heart, muscles, central nervous system and other parts of the body.

As little as 1/2 ounce of milk chocolate (or one-tenth that amount of baker's chocolate) can cause signs of chocolate poisoning in small animals.

Cats don't generally have a sweet tooth although there are exceptions.  Dogs, however, love the taste and smell of chocolate-laden sweets that are common during the holidays.  A small dog that gets into an entire basket of chocolate brownies or finds the large bag of baking chocolate chunks may get sick enough to need emergency vet care.  Chocolate covered nuts seem especially tempting to dogs.

Symptoms Symptoms can include vomiting, hyperactivity, hyperventilation, muscle tremors, shaking, dehydration, seizures and coma.  If you suspect your dog has eaten a large quantity of chocolate, note the quantity and type ingested and watch your pet carefully.  Symptoms may not show for several hours after ingestion but usually show within 12 hours.

Treatment There are a variety of procedures your veterinarian might use such as removing the chocolate by inducing vomiting or using a gastric lavage to wash out the contents.   Activated charcoal may also be given to limit the body's absorption of theobromine.   Treatment may be needed for symptoms ranging from dehydration to hyperexcitability.

People and chocolate - a lighter note Think it's fun to watch your cat go crazy over catnip? Maybe it is similar to the feeling you get from eating chocolate  The US averages an astonishing 11 lbs of chocolate per person per year.  Considering that many people do not eat any chocolate at all, that is lots of chocolate per chocolate-eating individual. 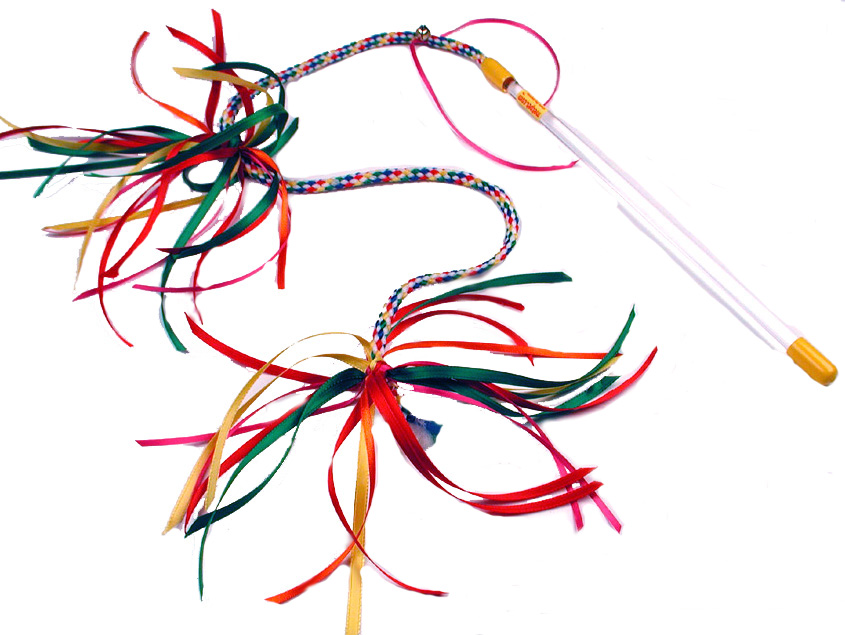 The classic Spider cat toy should be in every cat's playbox